High in the Himalayan foothills of northeastern Sikkim at 9430 feet lies the village of Zuluk. Once a pit stop on the ancient Silk route between Tibet, Sikkim, Bhutan and China it is now home to less than 600 people from approx. 6o families. They are ethnic Tibetan and Nepali having migrated here in the 1960‘s in search of political and cultural freedom and the promise of a better life. They were given work in road construction which ended in 2002. Now the only work is road maintenance which employs 12 people per year. The children and elders do menial tasks for the soldiers in the army border camp in exchange for foods and oil. They are not citizens of any country.

The nearest school for these children was a difficult long 10 km walk up and down the mountain taking several hours. As a result many did not attend school regularly if at all.

In 2007 under the leadership of Lama Paljor and the assistance of the Shambhala Association of New Caledonia, funds were raised , the villagers donated their labor and the Sukhavati Educational Hostel was built in Phadamchen Village, 10 kms below Zuluk. This allows for 60 boys and girls to regularly attend secondary school. 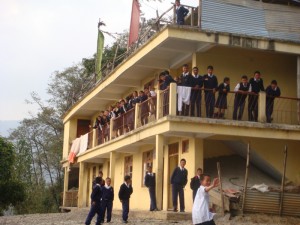 2008- TCEF joined forces with Lama Paljor and began sponsoring the education of these children. Without this hostel and the sponsorship program, these children would not be able to attend school. These kids are eager to learn and they understand the importance of their education to break the cycle of poverty. Sponsorship is critical to maintaining the hostel.

The children come from dire poverty and their families DO NOT have the money to pay for their children’s education. Sponsorship provides school fees, room & board, clothing and basic medical care.

2010 – in partnership with the Trans Himalayan Aide Society (TRAS) based in Vancouver Canada, TRAS and TCEF funded construction on the much needed third floor . It will be used as a dinning hall , study hall and general recreation room.

2011 – A Thermal Solar Water unit is in the process of being installed thanks to the generosity of our friends in the Monbuk Rotary Club in Australia. This will enable the children to have hot showers for the first time in their lives. 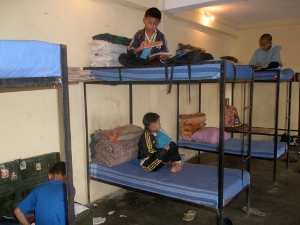 Currently the Zuluk Hostel in Phadamchen has 52 children. There are two staff members , one man and one woman who all cook, clean and care for the children. The children are provided three meals a day of mostly dal, rice and vegetables. The Hostel is home away from home for these children while they become educated. Your sponsorship dollars make this happen!

2012 – TCEF helped to bring the first computers for the children here. We believe this was a major boost to the education facilities of the children. In the years ahead, we look forward to doing more projects for them.

Your ticket for the: Sukhavati Educational Hostel