Stories from the Elders 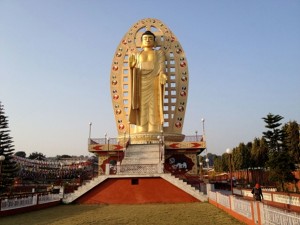 A few days ago I wrote an update on the children. Today I want to share some stories about our elders. In particular, let me share with you stories of three Tibetan elders – all of whom I know in real life, all three that I had the opportunity to meet earlier this year:

Grandpa Urtse is now in his nineties. He is from the same Tibetan settlement at Clement Town where I also grew up and spent many years. My memories of him goes back to the days when he had a decent number of cows and would herd them diligently to the forest just behind my home. Even then, he always carried his Tibetan rosary and recited the mantras as he herded his cattle. 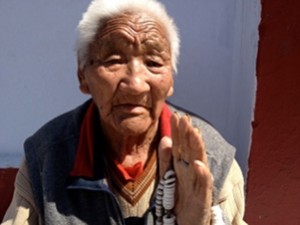 This winter when we met, he could barely hear or see me. He is now nearly blind and I don’t think he hears much also. But he wanted me to be sure to convey his gratitude to his sponsor and then explained how he in turn shows his. He told me that  every time, he got his sponsorship funds, he would divide it into two equal shares.  He would keep one half of it to meet his living expenses and the other half he would offer it to the monastery to request prayers for his sponsor!  I told him that he need not do that, that perhaps even his sponsor would want him to have all of that money to himself – but he reiterated that is is also about what he wanted to do – and that he wanted always for his kind sponsor to be blessed with prayers! 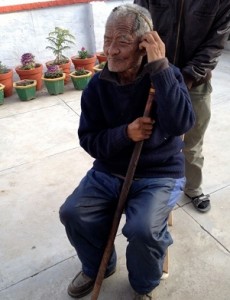 Aku Lori is also from Clement Town. He used to print and stitch Tibetan prayer flags. Everyone liked Aku Lori and we all thought that he had a great and dharmic profession. I remember him for his ready smile, for his personality and for his ability to reach out to those in need. When I met him after all these years, I could hardly recognize him. Age and sickness has taken away almost everything from him – his personality, his independence and even his color. To my memory, Aku Lori never married and therefore had no children. Now he walks with this big walking stick, is almost blind and it takes the tcef sponsorship funds and the selfless care of a neighbor for him to survive.  I asked him a really stupid question – whether the sponsorship funds were helping him. He smiled quickly, almost shyly and said what could be roughly translated, “ You bet. That’s what I live on now”.

Grandma Chungdon lives in Dharamsala. For many years she took care of Tibetan children 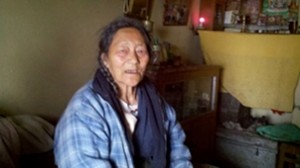 as a foster parent. She invited us into her small home with the biggest smile ever – and then like a good Tibetan host, she began to prepare tea for us – only it was such a struggle. Now in her old age, her constant companion is arthritis and every time she moved or lifted a pot or pan, she winced in pain. But, of course she would not let Gensang make the tea or have us leave without having offered it.  Her eyes welled up in tears when she talked about the problems in her life – old age, sickness, poverty – all the samsaric things the Buddha discovered centuries ago. We left her home with an overwhelming sense of sadness.

My father was always a much bigger man than I in every sense of the word. In Tibet, he was the leader of a our nomadic group – a true Khampa warrior.  But I have this sad memory, this sad image of my father bent over a charka or spinning wheel!  Mahatma Gandhi  inspired a generation of Indians with his nonviolent struggle to liberate India. I see him spinning by the light of the single small window.  His head is bent forward slightly. He now wears a pair of rounded glasses that sit uncomfortably on his nose. He spins expertly, deftly pulling the wool with his left hand while his right hand spins the charkha in perfect coordination. He has a cold and a dribble finds its way down but he neither has a hanky nor the time to wipe it away – instead he just sniffs it back. I loved to think and imagine seeing my father on a horse, with the winds of Tibet making his braided hair fly. This image that lingers on is that of a man bent out of shape by the tides of history.  I know that all the elders whose lives we now share though our sponsorships also got their lives bent out of shape.

In my travels, in my TCEF presentations, I always say that if ever Tibet and Tibetans need your love and help, it is NOW. Within a few years, this first generation of Tibetans who suffered so much will no longer even be with us.

The Elders Sponsorship, I believe is very different from the children’s. This is a truly a gift of compassion. The sponsorship dollars may not be as empowering or transformational as the gift of education, but sometimes it can also be a gift that helps an elder to simply survive. This Holiday Season, please consider sponsoring a Tibetan elder through TCEF.

Your ticket for the: Stories from the Elders

Stories from the Elders