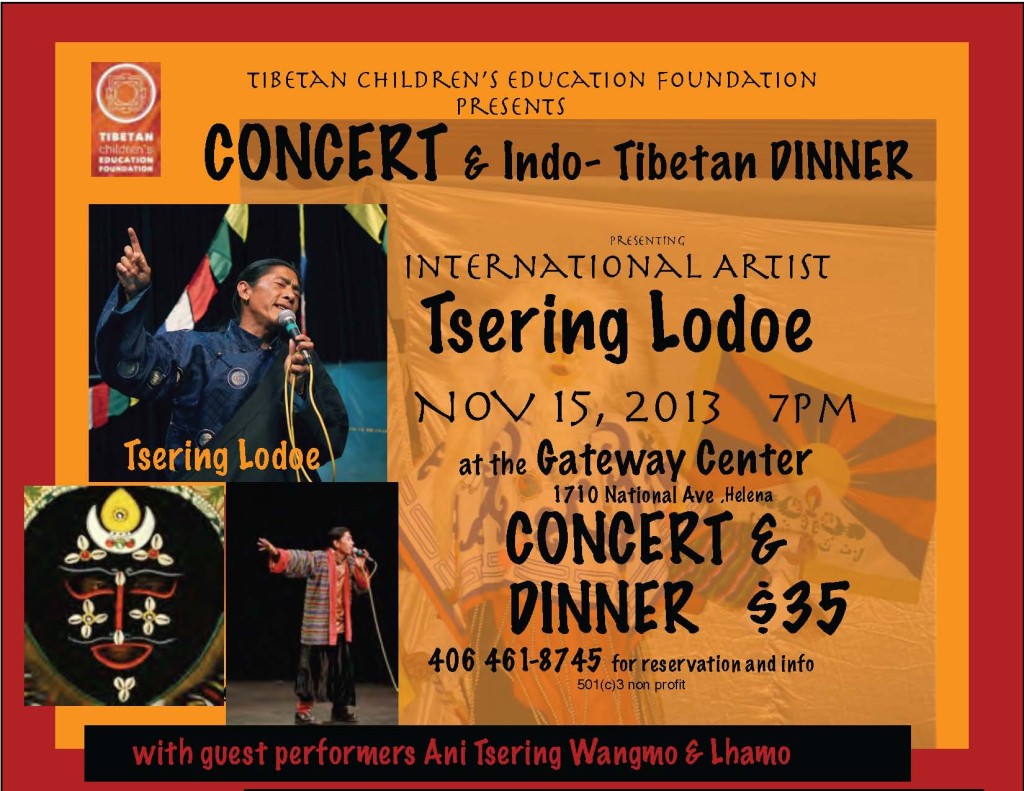 TCEF will team up with  Tsering Lodoe to present  a magnificent concert of traditional and contemporary Tibetan music at the Gateway Center , 1710 National Ave  in Helena Montana,  Friday November 15th, at 7 pm. The event includes a fabulous Indian Tibetan dinner followed by a silent auction. Tickets are $35 . Please call 406 461-8745 for tickets/reservations

Tsering Lodoe was born in India to Tibetan refugee parents from Kham Tibet. At 9 years old Lodoe was chosen to study  at the Tibetan Institute of Performing Arts (TIPA), in Dharamsala, N India. TIPA was established by His Holiness the 14th Dalai Lama in 1959, for the study of Tibetan traditional art and music.

As a young child learning the songs and dances were fun but it wasn’t until as a junior performer that Lodoe realized the responsibility involved. Lodeo was performing on an international stage when there was a political decision to remove the Tibetan flag from the stage. The senior members of TIPA refused to perform unless the flag was returned . It was at that moment Lodoe understood deeply the significance of  his performing the traditional music of Tibet. His voice , steps and music have become  an avenue to tell the world about his homeland and to preserve this rich culture based on altruism and non violence.

As  Lodoe continued his affiliation with TIPA for over 23 years he  earned advanced degrees in all aspects of traditional Tibetan music and performing arts. He toured the globe  extensivily performing  with TIPA.
Lodoe performed on the sound track of the Oscar nominated film, Himalaya directed by Eric Valli. Lodoe can also be heard on the sound tracks of Seven Years in Tibet, starring Brad Pitt and  recorded at George Lucas Studios.  Lodoe has sung for His Holiness the Dalai Lama many  times, most recently in Portland, Oregon earlier this year. He had the great honor  of singing for Pope John Paul in 1996 in Rome.  In 2005, Lodoe  won Best Composition and Best Opera Singer in the prestigious Tibetan Music Awards.   Most recently Lodoe performed with the Tibetan group Chaksampa at the Montana Folk Festival, Butte, Montana in July 2013.

Lodoe has a magical voice, which carries deep nuances of his rich Tibetan lineage.He is  deeply committed to preserving the rich music and dance culture of Tibet and to developing contemporary Tibetan music. It is with deep emotion, great sadness and heartfelt longing that he sings contemporary songs of struggle and the desire for freedom for all Tibetans. He plays the traditional damyin, drums and cymbals.
Tsering Lodoe will be joined on stage by special guests Ani Tsering Wangmo, affectionately known as the singing nun  and Lhamo a  singing Tibetan college student from Kham Tibet.

2.Online at www.TibetChild.org. Click on Donate Button, Scroll down to One Time Donations and use either Pay pal or Authorize.net. If you use Pay pal, for purpose, insert the words ‘Tibetan Concert’.
If you use Authorize.net ,  here is how you can let us know that this payment is for the concert:  Under  Billing Information after you put in your name, there is a space for Company. In that space please insert the words  ‘Tibetan Concert’.

Your ticket for the: TIBETAN CONCERT WITH TSERING LODOE